In response to Paul Bodnar being named the new Global Head of Sustainable Investing at BlackRock, Casey Harrell, Senior Strategist of The Sunrise Project, issued the following statement on behalf of the BlackRock’s Big Problem network: “It is an encouraging sign that BlackRock would hire someone of Paul’s caliber to lead the company’s implementation of […] 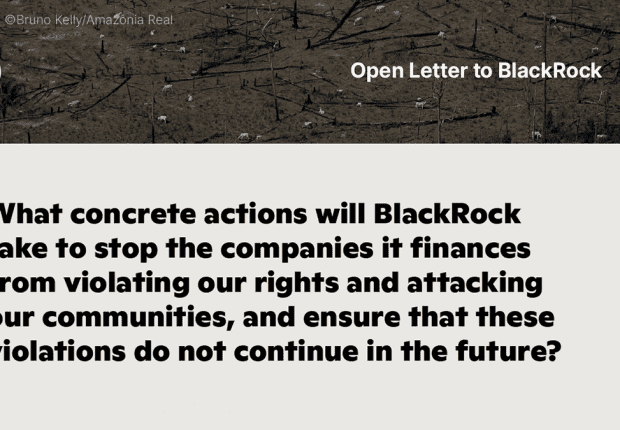 The full text and full list of signatories of the letter are below. Eloy Terena, Legal Coordinator of the Association of Brazil’s Indigenous Peoples (APIB), and one of the letter’s signers said: “BlackRock’s investments have an impact on our lives and our communities, and the company’s leadership, therefore, has a responsibility for our future. If […] Today, BlackRock released a memo on its approach to engagement on “natural capital” as well as an updated memo on its 2021 stewardship priorities. The new commentary marked the first time any of the big three asset managers – BlackRock, Vanguard, and State Street – acknowledged the interconnectedness of climate change, ecosystem protection, and Indigenous […]

Today, BlackRock released CEO Larry Fink’s annual letter to CEOs as well as a letter to its clients. The letters spelled out the next steps the world’s largest asset manager will be taking to address the climate crisis. With close to $9 trillion in assets under management, BlackRock has expansive power and responsibility to push […]

The scientific consensus is that the threat of catastrophic climate change requires bold and immediate action to reduce emissions across the planet. Major asset managers like BlackRock have a key role to play. Their immense power as shareholders and managers of vast capital influences how companies emit and wean themselves from fossil fuels. While […] In the middle of the night on Dec. 10th, BlackRock published a new report outlining its guiding expectations for company engagement in 2021. The announcement, similar to most news from BlackRock, has gained some attention across financial media, including from the Financial Times, Bloomberg, and Reuters. We dug into the details to pull out what […] In response to statements from BlackRock CEO Larry Fink welcoming the move by the UK to make the disclosure of climate-related financial risk mandatory, Moira Birss, Climate Finance Director at Amazon watch, core partner of the BlackRock’s Big Problem campaign, and Co-Coordinator of the Stop the Money Pipeline Policy Team, said: “Larry Fink is right: […] The European Commission did not properly consider conflicts of interest when it granted a contract to BlackRock to advise on the EU’s new sustainable finance agenda for banks, according to an opinion by the European Ombudsman published today. The conflict arises from the fact that BlackRock is the world’s largest investor in fossil fuels and […] In surprise move, BlackRock Votes for Procter & Gamble to Disclose on Deforestation

(October 14, 2020) In what The Financial Times called an “investor rebellion,” this week Procter & Gamble shareholders, including BlackRock, voted overwhelmingly to require the world’s largest consumer goods company to step up transparency efforts to address the deforestation and forest degradation caused by its use of palm kernel oil and forest pulp in products […] During the second half of September BlackRock was the subject of protests in 16 cities across the US and Europe, including many cities where BlackRock has never faced protest before like Miami, Los Angeles, Palo Alto, Chicago, Geneva, Zurich, Berlin, Budapest, Athens, and Brussels. The “September Swarm” culminated on Oct 2nd with bigger demonstrations […] A new report from Majority Action, released yesterday, shows that BlackRock used its huge voting power as a major shareholder to undermine climate initiatives in industries with huge climate impacts. BlackRock is the world’s largest asset manager and one of the largest shareholders in nearly every significant publicly traded corporation in the country–including the fossil […] Yesterday, Reclaim Finance, a European-based climate organization, in partnership with 27 other NGOs, released the first online tool which identifies, analyzes, and compares the coal policies of global financial institutions. The tool will be maintained and updated in real-time and covers financial institutions in 30 different countries. It is the first of its kind and […] New York, NY – Today, BlackRock released a new investment stewardship report. In the report the world’s largest asset manager detailed how it voted during the 2020 shareholder season which was the first big test of the climate commitments it made in January of this year. While BlackRock released voting briefings for a handful of […] BlackRock’s Words Must Translate Into Action on Deforestation

In June 2020, Friends of the Earth (FOE) and Amazon Watch (AW), core partners of the BlackRock’s Big Problem network, released a set of baseline principles to form the basis for asset managers’ policy on forests and human rights, based upon existing international laws and principles. The key takeaway from these principles is that the […] In January 2020, BlackRock announced it would place climate at the center of its investment strategy, stating that “climate risk is investment risk.”[1] While the decision included a divestment from coal, greater engagement with polluting companies, and placing sustainability at the core of its strategy, it notably lacked an explicit commitment to address deforestation or […] Today, BlackRock voted against the re-election of two directors at ExxonMobil and in favor of a shareholder motion that proposes splitting the role of chief executive and chairman. It also voted for a proposal requesting that Chevron report on how the company’s direct and indirect lobbying align with the Paris Climate Agreement goals. The proposal […] In a series of demonstrations after BlackRock’s annual shareholder meeting today, activists in New York City, San Francisco, Brussels, and London staged socially distanced protests to criticize the financial giant’s failure to live up to its rhetoric on climate change. In January, CEO Larry Fink spoke to the urgency of climate change and said BlackRock […] How is BlackRock Failing to Keep its Own Promises on Climate: Backgrounder

In January, BlackRock CEO Larry Fink committed to put climate change at the center of the firm’s investment strategy. Even as financial markets reel during the COVID-19 pandemic, BlackRock reinforced that it will continue to hold directors accountable for climate action. This shareholder season is a critical test to see if BlackRock will make good […]